Hitandrun have been working with the team Mercedes-Benz World to create this striking Team Mercedes Formula One display.

Permanently on display at the Mercedes-Benz Museum at Brooklands, the 14m x 3.5m x 5m display shows the two Silverstone Team Mercedes pit garages. The garages are represented by two large format canvas prints on light boxes and are set inside the built out frame of the garage walls. The floor in front is a large format photograph of the pit lane at Silverstone, and a real Mercedes W05 car, tyres and accessories are placed on it.

With no access to high enough photography for the canvasses, Mercedes-Benz World invited hitandrun to build CGI models of both garages in their entirety, and then produce ultra-hi res rendered images from them.

Working closely with Team Mercedes, hitandrun took on the mammoth task of creating accurate and detailed builds of all the furnishings, equipment, framework, and accessories present in the garages. 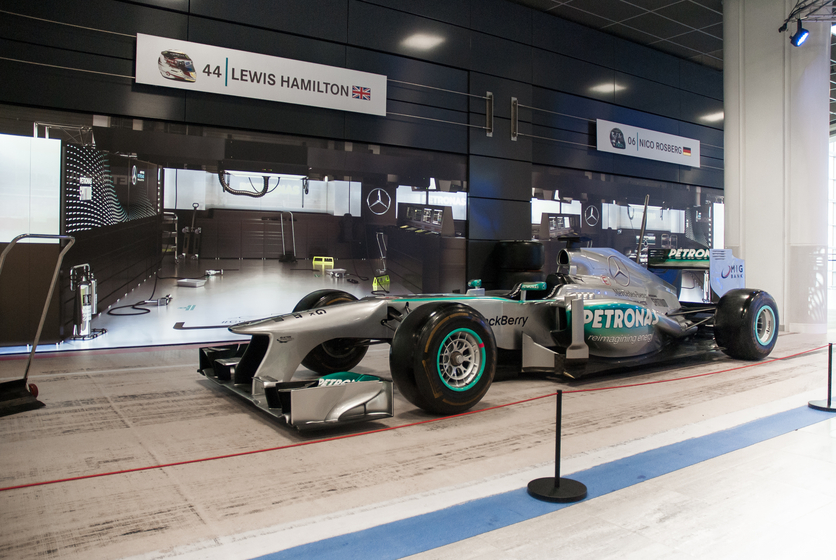 They spent a day shooting at the International garages at Silverstone, shooting sections of the pit lane floor, which they then hand stitched into a 14metre x 5metre image, which was printed onto plastic and used in the display. hitandrun also shot spherical images from the garage doorways, which when placed in the CGI models reflected the Silverstone pit lane and grandstand in every reflective surface in the garage.

hitandrun is represented by Début Art